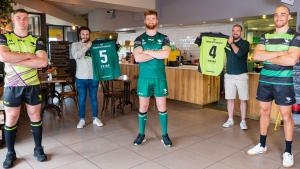 Connacht Rugby are delighted to announce that Tribe Hospitality Group will become an Official Kit Partner for the next three seasons.

Beginning with the 2020/21 season, the partnership will see Tribe Hospitality appear on the lower back of all Senior Men’s home, away, European and training shirts and Women’s Home shirt. The new sponsorship follows the previous announcement of Tribe Hospitality becoming Official Catering Partner of Connacht Rugby.

The catering partnership involves providing meals to both senior and academy players 3 times a week as well as all pre and post-match hospitality in the Sportsground.

“We are thrilled to announce this new partnership with Tribe Hospitality Group. We have had a brilliant response from the players since the catering partnership began earlier this summer, and we look forward to working with Tribe in the years ahead to build on our existing relationship. We were also particularly pleased to see such a great reaction to the new jerseys which feature the Tribe Hospitality Group logo.”

“We were delighted to announce our catering partnership with Connacht Rugby this July. The response was incredible. We are thrilled to have our logo on the back of their jerseys. Connacht Rugby are one of the most recognisable organisations in the West of Ireland with a huge fanbase so to be affiliated with them and be on their jerseys is amazing. It is exciting to become kit sponsors with the Women’s Rugby team. The success of the Women’s team over the last number of years has been brilliant for Connacht Rugby and we can’t wait to support both teams in the Sportsground over the next 3 years!’

Tribe Hospitality Group are better known by their popular cafes across Galway city including, Ground & Co in Salthill, Baby Ground & Co in Knocknacarra, Mr Waffle in Newcastle, Delight Café on Renmore Avenue and Kingfisher, NUIG and also SAOL Café, NUIG. All shops have now reopened for takeaway and sit-in, with the exception of Delight NUIG and SAOL Café which will reopen at a further date.

More information can be found at www.connachtrugby.ie and across all social media channels.

Page load link
We use cookies on our website to give you the most relevant experience by remembering your preferences and repeat visits. By clicking “Accept All”, you consent to the use of ALL the cookies. However, you may visit "Cookie Settings" to provide a controlled consent.
Cookie SettingsAccept All
Manage consent

This website uses cookies to improve your experience while you navigate through the website. Out of these, the cookies that are categorized as necessary are stored on your browser as they are essential for the working of basic functionalities of the website. We also use third-party cookies that help us analyze and understand how you use this website. These cookies will be stored in your browser only with your consent. You also have the option to opt-out of these cookies. But opting out of some of these cookies may affect your browsing experience.
Necessary Always Enabled
Necessary cookies are absolutely essential for the website to function properly. This category only includes cookies that ensures basic functionalities and security features of the website. These cookies do not store any personal information.
Non-necessary
Any cookies that may not be particularly necessary for the website to function and is used specifically to collect user personal data via analytics, ads, other embedded contents are termed as non-necessary cookies. It is mandatory to procure user consent prior to running these cookies on your website.
SAVE & ACCEPT
Go to Top